Explore Bhutan tour takes you to Himalayan Country Bhutan. Bhutan is also known to the world as the Land of hidden treasure like heaven, untouched beauty that nature has to offer, spectacular mountain views, immense scenic beauty and a unique culture and lifestyle. On this tour, you will be coming across unbelievably breath-taking mountains that are perennially capped with snows, waterfall, rivers and streams, chain of mountains that separate many beautiful valleys in Bhutan. You will be witnessing different kinds of architecture structural like Buddhist monasteries, Lhakhang and the fine arts and crafts of Bhutan.

Day 8: Drive to Paro airport for onward flight to Kathmandu

Fly onboard Druk Air to Paro, Bhutan.  On a clear day the panoramic views of the Himalaya are sensational, including Everest, but particularly exciting is the approach through the Bhutanese foothills and the landing, including a few steep turns to land at the tiny airstrip of Paro. In Paro you will be received by the representative from Dream Tibet Travel and transferred to Thimphu that takes an hour.  Afternoon visit Tashicho Dzong, The memorial chorten, handicraft stores and emporium and city of Thimphu. Overnight at Thimphu.This fortress serves as the office of the King, ministers and various government organizations. It also is the headquarters for central monastic body of Bhutan. Bhutan’s spiritual leader Je-Khenpo and the monks of both Thimphu and Punakha reside here during summer. It is also the venue for Thimphu Festival in the fall season. Memorial Chorten This white and tall landmark of Thimphu was built in 1974 in the memory of third King, Jigme Dorji Wangchuk, who is popularly regarded as Father of Modern Bhutan. It is a four-storey tall white building, containing statues and iconography of deities from complex tantric teachings and serves as an important place of worship for Thimphu residents, as well as from other parts of the country.

There are a good many things to see in the capital which has a very relaxed, laid-back feel about it. Thimphu is relatively small having a population of approximately 90,000 people and the streets are wide and tree lined. Early in the morning, you can take a self-guided 15 minute walk (or you can do with the guide later for your convenience) from the hotel to the Memorial Chorten, a shrine built in the memory of the late king, Jigme Dorji Wangchuk. Many Bhutanese people gather here to pray every day. Later in the day, start sightseeing with visit to a Nunnery on the outskirts of Thimphu. You will then visit the Changangkha Lhakhang (temple) and see how paper is made from the daphne plant with cosmos flower petals and other plants.
At the end of the day, we may also pay a visit to the great Tashichho Dzong, seat of Bhutan’s administrative and religious centre. Overnight at hotel, Thimph Zilukha Nunnery is housed in Drubthob Goemba (monastery). There are about 70 nuns who live and pray everyday in the monastery. There are good views of Tashicho Dzong, Golf course and upper Thimphu.Takin Sanctuary Takin (Budorcas taxicolor) has been chosen as the national animal of Bhutan is based both on its uniqueness and its association with country’s history and mythology. It is said that Devine Madman, a popular saint is said to have created it with his magical power at a large congregation of devotees. It resembles a cow from back, a goat in from the front, and it continues to befuddle taxonomists, who cannot quite relate to other animal.Paper Factory Traditional papers were made from the daphne plant, using simple methods. Like rice papers, these papers are said to last longer.Sangaygang View Point (Telecom Tower) there’s a wonderful view of Thimphu valley from the hillside below the telecommunications tower (elevation 2685m), high above the town at the end of a road that branches off from the approach to the youth centre. The complex also houses the broadcasting studios of Bhutan television. Don’t photograph the telecommunications installation, but the valley is worth a few snaps. The area is known as Sangaygang and it becomes a lover’s lane late at night.

Day 03: Thimphu  – Trongsa (6 – 7 hours) In the morning you drive to Punakha, an old winter capital of Bhutan. En-route stop at Dochu LaPass, 10,000ft/3,048m to view the eastern Himalayas, including Bhutan’s highest mountain, Gangkar Punsum, 24,770ft/7,550m. The road then drops down through varied –ever changing forest, finally emerging into the highly cultivated Punakha valley. Continue driving down the valley to the town of Wangdiphodrang. Here again there is a very large fortress built in the shape of a sleeping bull. Our road gradually winds its way up towards the Pele La Pass at 11,152ft, where we make stop for views of the snow clad peaks, including that of Bhutan’s sacred peak Mt. Chomolhari. Possibly, your picnic lunch is planned at Chedebji Chorten (Stupa) patterned after Swayambhunath in Kathmandu. It is a popular picnic lunch and pilgrimage for Bhutanese driving east-west road.
On arrival in Trongsa, you may visit the inner courtyard of historical Trongsa Dzong. Trongsa is a very popular place with largest Dzong in Bhutan and certainly one of the most impressive ones. It was from here that the present royal family emerged as the most powerful force at the beginning of this century.Overnight in, Trongsa

After breakfast in the hotel drive across the Yotong La 11,234’and descend eventually into the valley of Chumey, the first of four Bumthang valleys. Here we will visit the Palace used primary by the second King as his summer residence, and hike for about 15 minutes that brings us to the Prakar monastery, followed by visit to Yathra Weaving centers (a Colourful wool weaving).  Then we’ll drive onto the Jakar the center of Bumthang valleys. Bumthang valley is one of the most sacred in the kingdom and innumerable legends surround the area. It is here that the kings were cremated and the present royal families trace their ancestry back to a famous saint called Pemalingpa, who was also a smith in Jakar Township.
Afternoon visit the Dzong, Jambay lhakhang, kurjey temple, tamshing, the swiss farm area, fruit and beer factory (optional – sometime does not allow permit),drive of about 2 hours 30 minutes hours. Overnight at Mipham Guest House, Bumthang.

After breakfast retrieve back to Punakha, warm place at 1400 m. Time pernmitting vist the mighty and most impressive Punakha Dzong and hike to chimi lhakhang – the temple of divine madman. Chimi Lhakhang was built by lama Drukpa Kunley in 1499. He subdued the demoness of the Dochu la with his ‘magic thunderbolt of wisdom.’ A wooden effigy of the Lama’s thunderbolt is preserved in the Lhakhang, and childless women go to the temple to receive a wang (blessing) from the saint.It’s a 20-minute walk across the rice fields from the road at Sopsokha to the temple. The trail leads across rice fields to the tiny settlement of Pana. There are very few monks at the temple, which is surrounded by a row of prayer wheels and some very beautiful slate carvings.

After breakfast drive west via dochula pass 3080 m, weather permitting enjoy the Bhutan Himalaya peaks above 7000 mts. Continue driving to Paro for another 2 hours. Afternoon visit the national museum and the Rinpung Dzong or any other sightseeing your guide will take.Overnight at Hotel.

Full day sightseeing tour in Paro. In Paro visit Tiger’s Nest Monastery (Taktsang) and Farm House, and Visit the National Museum housed in an ancient watchtower, which has a fine collection of ancient Thangka painting if time is permitted you O/N at Hotel,  Overnight at Hotel

Day 08: Drive to Paro airport for onward flight to Kathmandu

After early breakfast at the hotel drive to Paro airport for your sensational take-off and scenic Himalayan flight past Chomolhari, Bhutan’s second highest peak. 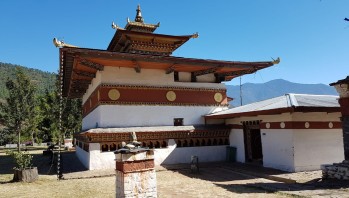 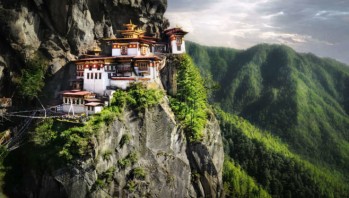